The Evolution of Air Conditioning from the Very Beginning 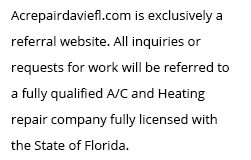 We all know how easy it has become these days to control the indoor temperature with the help of an air conditioner. What’s more, AC repair Davie services are also available for 24×7 to save you from unwanted discomforts. In short, the experienced technicians of AC repair Davie are just a call away from you. But do you know how air conditioners have evolved from the very beginning? There’s a long story behind the evolution of air-conditioning system, even before the invention of the first electrical air conditioner.

Many people believe that the first air conditioner was discovered in the 2nd century, and it was invented by Ding Huan, a Chinese mechanical engineer. It was just a rotary fan having 7 wheels with a diameter of 3 meters each. This machine was manually powered, as a specific number of people were needed to make it run and hence, only a few (rich) people could afford it.

Around 14 centuries later, another technique was introduced to get rid of the scorching summer heat. People started to collect and store ice in the winters so that it can be used in the summer season. However, the task of collecting ice is performed by prisoners and paid workers and therefore, only kings and some wealthy people were able to utilize this technique.

The biggest discovery in the field of air-conditioning was made in 1902 by Willis Carrier. He was an American engineer with a great expertise in heating the objects with steam, but he unwillingly ended up invented the first-ever electric air conditioner. In short, he was once trying to invent a machine that can remove the excessive moisture from the surrounding atmosphere for a printing factory, and he succeeded. However, he found that the machine was also cooling the indoor air at the same time while trying to control the indoor humidity. Today, we are using the same principle (invented by Willis Carrier) to get the desired temperature in our home. Thereafter, several changes were made to air-conditioning systems to help the machine work more effectively. For example, from ammonia, methyl chloride, propane, to Freon (R-22) and then Puron (R410a), various types of refrigerants were used in air-conditioning systems at different times. What’s more, smart thermostats were also discovered to maximize the cooling comfort in your home, office and many other places.